skip to main | skip to sidebar

The first project I'm documenting on Red Yarn is called Lomax-a-Day. A coworker turned me on to an awesome arts collective called Artclash (artclash.com). This is the 6th year that Artclash has organized "Fun-a-Day," a project in which artists produce one piece of artwork each day for the entire month of January and then submit their 31 pieces to a final show. 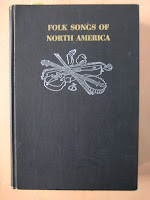 I've been collecting old folk music anthologies, my favorite of which is Alan Lomax's 1960 Folk Songs of North America. I enjoy learning songs out of these old books, especially songs I'm not already familiar with. The details that are lost or added or changed in transcription plus the details that are changed through my poor reading of sheet music lead to an interesting (to me) reworking of history. So, my project is to teach myself one song a day out of Folk Songs, arrange it to suit my fancy, and record it on Garage Band. The anthology is divided into regions (the North, the Southern Mountains and Backwoods, etc.), and the songs of each region are organized loosely by subject or genre. I hope to record at least one song out of each subsection throughout the month.
Yesterday, New Years Day, I learned and recorded "Shenandoah," a classic that yes, I admit, I was familiar with already. The Boss does an amazing version of it on his Seeger Sessions, putting it in 3/4 time and singing a lot of lyrics that aren't in Lomax's anthology. I stuck pretty closely to the transcribed melody, but I enjoyed playing with the rhythm and dynamics to give it the grandiose feel it deserves. My favorite lyric is definitely in the third verse--"O Shenandoah, I'm bound to leave you/(Away you rolling river)/O Shenandoah, I'll not deceive you/(Away, we're bound away...)." So beautifully simple, but perfectly encapsulates this current that runs through the whole song, a confusion in subject. Is he saying goodbye to a river? A woman? A whole region? I don't know, but the current pulls you deep into the song's longing, who/whatever it's about.

Today I learned and recorded "Whisky in the Jar." It's an Irish ballad about an outlaw who robs Colonel Pepper (any relation to Sergeant or Doctor?) up on Gilgarra Mountain, gets turned in by his sweetie, is imprisoned, then busts out ("they put me in jail...but they did not take my fists, so I knocked down the sentry..."). The chorus strikes me as prototypical Irish folk fare ("Musha ringum duram da, whack fol de daddy-o... there's whisky in the jar" over a V I IV V chord pattern), but the verses are a different matter. First of all, the story they tell hardly relates to "whisky in the jar," except that maybe an outlaw needs to be good and soused to do his outlawing. Otherwise, the jolly chorus seems like an afterthought, as if an Irish folk song has to be about drinking even if its narrative isn't. The chord progression in the verses (I VI IV) is similarly at odds with the chorus, with the major root chord falling into the relative minor, trying to pull itself out with the IV, but falling again and again back into minor until the drunkenly cheery chorus comes along and has a good laugh about all this depravity. A few lyrics in the song just blow my mind, particularly this one in the first verse: "I drew forth my pistols and I rattled my sabre/saying 'Stand and deliver for I am a bold deceiver...'" Such amazing language.
As you probably noticed, I've posted the songs as videos, since Blogger doesn't have an easy way to embed mp3s yet.
Posted by Red Yarn at 12:53 PM